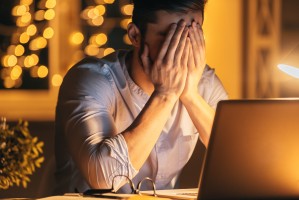 It is important to understand the difference between charata: healthy guilt & regret, as opposed to yiush: shame & despair.

We generally use the words “shame” and guilt” interchangeably. One may say, “I am ashamed of what I did”, meaning “I feel guilty over what I did.” Technically, however, the two terms are different. Guilt is about what a person did, and it can be a constructive feeling in that it can lead one to Teshuvah, to take corrective action. Shame, however, is what one feels he is. In other words, guilt is “I made a mistake”, whereas shame is “I am a mistake”. If one feels that he is inherently flawed, that he is made of “bad stuff”, there is nothing he can do to change that. With guilt there is hope of improvement, but not with shame.

Every person should feel he is a child of Hashem with a holy Neshama. Hashem doesn’t make defective goods. There is never room for despair or shame. However, healthy “guilt” is important. As the Nesivos Shalom writes in Parshas Noach, the guilty feelings we have are a gift from Hashem that come from the inherent good inside every Jew. Indeed, he writes, a Jew who does not have these feelings anymore, no longer has much hope.

A person who gives in to the Yetzer Hara only because the Yetzer hara has tempted him strongly and he can't hold back, is still not "bad' in essence. With sincere Teshuvah, Hashem will forgive him. But if one doesn't feel guilt anymore, that means that the bad has taken him over totally and there is little hope.

The Nesivos Shalom ends by saying that “guilt” is actually a Tikkun for every Jew to be able to break free of the bad. Even when one falls, they should make sure that the fall does not become part of their essence. By continuing to hold on to Hashem and feeling guilty when we are far from Him, then even in the case of the worst sins chas veshalom, we still have hope and will be forgiven.

There’s a simple test we can do to know whether we are being motivated by healthy guilt/regret or by shame/despair. If we see that we want to get right back up and find ways to strengthen ourselves again, then it’s a sign that our “bad” feelings are those of healthy guilt and positive regret. If, however, we feel that we just want to give up, then it’s a sure sign that we are experiencing despair and shame, and we must quickly find a way out of these harmful feelings before they lead us to a vicious cycle of continued falls.

How indeed can we remain happy after a fall? Let’s read on…