Principle 17: Don’t dwell on the past 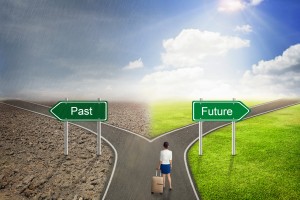 Although the spiritual damage we cause by acting out is very great, we must accept that Hashem brought us into this situation and that it is not all our fault. Let us never dwell on how it happened, or on past falls. This will cause us to feel down and lead to future falls. The Chidushei Harim (in Likutei Yehudah) tells his followers never to look back, claiming that if we look back, we remain in the mud. Everyone has dirty laundry. We don’t have to be ashamed of our laundry, unless we let it pile up and never clean it.

We must also realize that we didn’t always have free will in the past. This is clear from various Sefarim and in various places in Chazal. To quote one of the foremost baalei mussar of our times, Rav Shlomo Wolbe, [zt"l]:

The great [Jewish] philosophers established bechira as the cornerstone for the whole Torah.... But from this resulted a common misperception among the masses; that all people actively choose their every act and every decision. This is a grievous error. (Alei Schur, Vol. 1, p. 156)

What, then, is bechira? To answer this question, Rav Wolbe refers us to Rav Eliyahu Dessler's "phenomenal essay on bechira” (Michtav MeEliyahu, Vol. 1, pp. 111-116). In this essay, Rav Dessler describes how the “nekudas habechirah – the point of free choice” is different for different people and in different situations. He explains that bechira is not a theoretical concept that can be applied to any circumstance where a person can hypothetically choose between two options. Rather, it only applies to moral conflicts where the two opposing forces are of approximately equal strength, the person is aware of the internal conflict, and he makes a conscious decision in one direction. When a person does something over which he does not experience conscious conflict, or if the compelling force on one side is significantly stronger than the other, the fact that he is theoretically able to decide either way does not qualify his act as an expression of bechira.

“Ain Hakadosh Baruch Hu ba beterunya im habriyos – Hashem doesn’t come with complaints to his creations.” As the Pasuk says: “He created together all their hearts and understands all their deeds,” and he knows that almost all men stumble in this sin at some point in their youth.

There’s a well known adage that if Hashem gave us a test, we must have the ability to overcome it as well. R’ Tzadok HaKoehn says though, (in Tzidkas Hatzadik) that this is not as simple as it sounds. It is true that we all have free choice to do what Hashem expects of us in this world, over the course of our lifetimes. However, in the process of our journey, there are many times when a person is considered an onus.

After the sin of the golden calf, the Midrash says that Moshe said to Hashem, if a father gave his son gold and sat him down on the doorstep of a Beis Zonos – “ma ya’aseh haben velo yecheta? - What can the son do and not sin?” In other words, we find in Chazal that there are times when a person may not have full Bechira.

See also the Rambam Hilchos Issurei Biyah 1:8 – “for the Yetzer and human nature forced her to want,” and see Tosofos in Sanhedrin 26b where they discuss how someone suspected of illicit relations may still be a Kosher witness, since it could be that his desires simply overpowered him. And see the Gemara in Brachos, 32b: “Asher Hari’osi” where Hakadosh Baruch Hu acknowledges to Eliyahu Hanavi that He was the one who had turned the Yidden’s heart away from him.

The Steipler too, in regards to a specific behavior that someone had difficulty controlling, writes: “He is not a Ba’al Bechira now in this area, and the only thing he can (and should) do, are Tikkunim that will help him over time.”

Once we understand that we didn’t always have free will in the past, we will prevent the guilt from dragging us down into a vicious cycle of despair and continued falls. And guilt can be even more dangerous than the falls. As they say: "It's not the one cookie you ate that broke the diet. The diet ended when you felt bad about that one cookie, and then went on to finish the entire BOX!”

And even if we may have had some freedom of choice at the time we fell, it could be that we had very little. The sins we did are only judged according to the circumstances and the level of free will that we had at the time. Only Hashem knows if we could have done better or not.

But when we talk about the present moment, we can never know how much free will we have and we must always try our very best.