The exchange below documents an interesting shift in the religious world regarding the awareness and willingness to address the issues of internet addiction in the frum world. (The article was posted with permission of Mishpacha Magazine. © Mishpacha Magazine Inc. All rights reserved.)

On June 1, 2016 the Mishpacha Magazine ran a story about GuardYourEyes in "Lifelines" called: Double Life 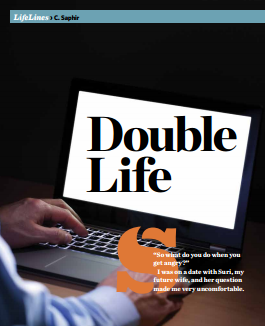 On June 24, 2015 the Mishpacha Magazine ran a story about GuardYourEyes in "Lifelines" called: Escape from Gehinnom

In Jan, 2013, Lifelines had also run a story about GYE called: Computer Trouble 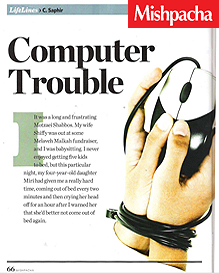 We wrote a thank you to C. Saphir (the author) for the writing these stories and helping spread the word.

Below is the interesting exchange we had:

Thank you for the excellent story in Mishpacha recently called "Escape from Gehinnom" about how GuardYourEyes was able to help this young man. It is very well written, Yasher Koach!

It is refreshing to see the community is finally being open about the issue. In Nov 2009, the author of "Shattered Glass" in the Mishpacha had a story going about internet addiction, but when we encouraged her to open up more about the problem and to mention GYE as a solution, this is what she responded to us:

I have been getting not just flak, but MAJOR flak , so major, in fact, that I am forced to back down and rework my plot in a way that is less threatening.

I hope that one day we will be able to deal with this issue properly and comprehensively.

In the meantime, I will do my best to work within the space in which my hands are tied.

I recommend GYE at every opportunity I get.

I can't put it in Hamodia because they are not permitted to acknowledge that internet even exists.

However, recently there was a two page article in the Hamodia that came out about our organization - see below. On page 2 (in light blue) there are a number of stories about people who struggled and were helped through GYE...

B"H things have changed. Thank you for being part of the solution.

I'm humbled to have had the zechus to be part of the effort to spread awareness of the tools available to help with this devastating problem.

Thank you for sending the Hamodia article. It just goes to show how prevalent the issue has become, unfortunately.

I actually wrote a different story 2.5 years ago about this problem, entitled "Computer Trouble" in which GYE figured prominently. I believe it was posted on the GYE website.

I can't fathom the Gan Eden that you and your supporters have waiting for you. It's unbelievable how you fought against all odds to fill a void.

Hashem should just give you hatzlachah and siyatta d'Shmaya to fight and eradicate this problem.