From the inside out 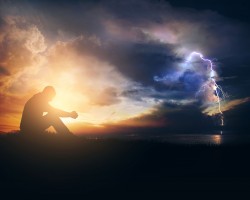 I would like to paraphrase a beautiful Dvar Torah I heard, mostly in the name of R’ Schwab.
We spent a lot of the month of Elul saying in Slichot the following words:
"מִי שֶׁעָנָה לְאַבְרָהָם אָבִֽינוּ בְּהַר הַמּוֺרִיָּה הוּא יַעֲנֵֽנוּ. מִי שֶׁעָנָה לְיִצְחָק בְּנו כְּשֶׁנֶעֱקַד עַל גַבֵּי הַמִזְבֵּֽחַ הוּא יַעֲנֵֽנוּ."
“He Who answered Avraham on Har Hamoriah, He will answer us. He Who answered Yitzchak, his son, when he was bound up on the Mizbayach, He will answer us.”

The message is powerful. God is, and has always been, the Answerer of prayers.

However, if we look in the Pesukim of Akeidat Yitzchak, we do not find that Avraham called out to Hashem at Har Hamoriah, nor that Yitzchak prayed as he was bound on the Mizbayach. So what, exactly, did G-d answer to?

The Midrash relates that on their way up the mountain, Yitzchak realized that he was going to be the Korban. At that moment, he was filled with Emunah and the Ratzon to serve Hashem, even at the cost of his life. But he was also realistic and knew that when the time came, his spiritual impetus might wane. So Yitzchak told Avraham to bind him tightly, so he wouldn’t be able to resist.

Yitzchak was a precious gift to Avraham, an open miracle. Hashem commands Avraham to slaughter his own son, and Avraham doesn’t ask any questions. He doesn’t hesitate. In fact, he wakes up early the next morning to be as quick as possible in fulfilling Hashem’s Ratzon.

Where is the Tefillah of Avraham and Yitzchak? It’s between the lines. Imagine the scene as Avraham and Yitzchak trudged up the mountain, Avraham knowing he was about to lose his only son, Yitzchak aware that his life was about to end. Where is their Tefillah? In their heads, they are both crying out to Hashem. Avraham is saying,“Hashem please, I want to fulfill your Ratzon. I want to sacrifice Yitzchak to you. But I need you to keep this Emunah inside of me strong. I need you to help me want to serve you!” Yitzchak is saying, “Hashem, I am willing to die in order to serve you. But I pray to you to keep my Emunah steady.” Both of them are silently praying to Hashem, not to change their circumstances, but to stay strong and spiritually driven.

Our addictions are internal. Sometimes the external factors are unchangeable. Sometimes we accidentally see things we aren’t supposed to. Sometimes we even do it on purpose. But our Tefillah to Hashem should be to keep us strong internally. We should cry out to Hashem and tell Him how badly we want to serve Him but that we just need His help keeping that Emunah strong within us. And Hashem, the same God who answered the Tefillot of Avraham and Yitzchak to maintain their Emunah to the point where Yitzchak was willing to be killed and Avraham willing to kill him, that same God - הוּא יַעֲנֵֽנוּ. He will answer us.