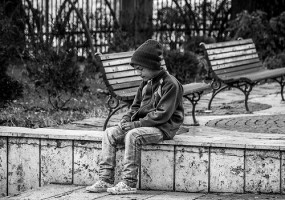 To hear this parable told over by the author, click here.

There was once a king and queen who had an only child in their old age, who they treasured more than anything in the world. They surrounded him with gold and sparkling gems and showered him with endless love.

One day, the door to the palace was unintentionally left open and the young 4 year old boy wandered out and got lost in a forest nearby. A peasant boy found him and brought him home, not knowing who he was. The confused prince cried and cried but quickly forgot who he was or where he had come from. Of course the king and queen were terribly distraught, but there was nothing they could do. Over time, the peasant family moved to a distant city, far from the capital where the king resided.

As the boy grew up in the peasant’s home, he would have occasional flash-backs, and a warm feeling of love would overcome him. He felt a deep yearning in his soul, but could not put it into words. When the sun was setting and the rays would sparkle between the trees, he would have a flash-back of sparkling gems surrounding him. He would run towards the trees but find nothing there… Sometimes when he would stand near the river and the sparkling rays of the sun would dance upon the water, he would once again feel this deep yearning in his soul. He would throw off his cloak and dive into the cold waters to try and catch those sparkles, but he would just come up with nothing, cold and frustrated. Whenever he would come across colored stones he would pick them up and save them. He began to collect these stones obsessively, feeling deep in his subconscious that there was some magic power in them, without understanding why.

One day, a minister who was a close friend of the king was visiting this distant city and he thought he felt a spark of recognition when seeing the boy. The prince had grown to resemble his father, and the minister had a hunch that this boy might actually be the long lost price. He asked the boy to accompany him to a nearby inn, where they spoke for a long time. He probed the boy about any hints about his past, but the boy could not remember anything but his peasant youth. In passing, the boy mentioned his obsession with colored stones and sparkling lights. The minister immediately understood where this was coming from, and finally revealed to the boy what he had suspected all along, that this boy was really the long-lost prince. The boy refused to believe this and in great confusion he ran away into the forest to escape the raw feelings of emotions that overcame him. He sat on a rock and cried, unable to digest the enormity of the implications, but somewhere deep down in his soul he knew it was true. Over the next few months, each time he saw a colored stone or sparkling lights, he began to ask himself why he had such a fascination with them. Instead of running aimlessly towards the lights, he would ponder the minister's words. Over time, he began to slowly make his way in the direction of the capital city. Whenever he would see sparkling lights between the trees or on the water, he would feel a deep sense of yearning. But now, instead of jumping into the water or running into the trees, it would spur him on to where he felt his heart truly belonged. After many long months of traveling, he finally arrived back at the palace. His parents recognized him, and amidst the tears and the hugs, he was once again where he truly belonged, surrounded by the beauty of precious gems and true royalty. There was great rejoicing throughout the kingdom. And when it came time for the prince to rule the land, he turned out to be a wise and beloved king, loved by all his subjects dearly. The journey that he had undergone during all those years away from the palace had taught him so much about the ways of the world, and he had a deep sympathy and understanding of the needs of the poor and downtrodden people, and he provided his subjects generously with all their needs. And of-course, they all lived happily ever after.

You know my friends, in the incredibly beautiful piut of Yedid Nefesh, written by Rabbi Elazar Azcari who lived in the 16th century, describes the yearning of our souls for the closeness of Hashem, calling Hashem the yedid nefesh, our soul-mate. And the piut says:

Your close friendship is more precious to our souls than all the pleasures of this world.

I am love-sick for you, Hashem. What does “love-sick” mean? If someone is married to the woman of his dreams, would you call him love-sick? No, love-sick is when you feel an incredible yearning and love, yet you have no way to express it. נַפְשִׁי חוֹלַת אַהֲבָתֶךָ. Hashem, we have this deep love in our souls but don’t know where to channel it. We see sparkling lights and fleeting beauty all around us, and we want to run towards it but we don’t understand why.

Then we shall be strengthened and healed, and our souls will bask in everlasting joy.

My friends. Our souls were carved from under the kisei hakavod. We were created so close to Hashem, surrounded by sublime light and cradled in Hashem’s loving arms.

But we were sent down to this dark and coarse world on a difficult journey. We quickly forgot who we are, and began chasing the imaginary beauty that we see all around us, the fake colored stones and the beckons of the glittering lights that stir something deep in our souls. But we were created in the image of Hashem, and our soul’s yearning will never find rest until we remember who we are and begin our slow trek back to the palace of Hashem. This journey is building us into who we really need to be. And when we come back to the palace after 120, the spiritual light and closeness to Hashem that we will feel will be so much greater than it originally was when we were created. And it will last for all eternity!

So whenever we see the colored stones and sparkling lights of this world and we want to run after them, let us remember where this yearning is really coming from. We are the children of Hashem, the Master of the Universe, and He has infinitely greater light and pleasures in store for us. May we not got distracted by the glitter of this world, and aderaba, when we feel that pull, let it spur us on to remember where the yearning is truly coming from, so we stay focused on making our way, slowly but surely, back to the palace of Hashem’s infinite glory and pleasure, for all eternity.