Come to your Yetzer Hara! 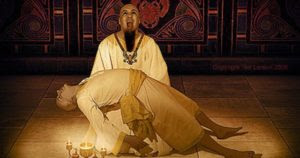 "When we became addicts, crushed by a Self-Imposed Crisis we could not postpone or evade, we had to fearlessly face the proposition that either G-d is everything or else He is nothing. G-d either is or He isn't. What was our choice to be?" (Big Book, Page 53)

Commentators have been struggling to understand why Hashem said to Moshe, "Come to Pharaoh." It would have been more grammatically correct to say "Go to Pharaoh." Rashi said that the scripture implies "Come to Pharaoh to warn him of the next plague." And Ramban agrees that the language implies that he was sent to deliver a warning. I don't know about you, but this still doesn't make sense to me. Wouldn't it still be better to say "Go?"

Let's follow more of the text to see how to understand this dilemma. In verse 2 is written, "so that you may relate in the ears...that you may know that I AM HASHEM!" And verse 3 follows with Moshe and Aaron coming before Pharaoh and said to him, "Until when will you refuse to be humbled before ME?"

Our commentators note that the Exodus/Liberation was a seminal event in world history because it demonstrated G-d's mastery over nature. That G-d was not just an aloof Creator that took a backseat after the creation to let the world and man go forth in some haphazard unguided way thru history. We even see that "The Name - Hashem" denotes His eternity and his 24/7 constant involvement in the Universe thru He was, He is, He will be.

Finally, R. Bachya finds in the text "to be humbled before me" that the key to repentance and freedom is submissiveness before G-d. Because Pharaoh was haughty, he could not see the truth and would not bow to the Divine will. He paid a huge price for his arrogance by having his family and all that he built and treasured completely destroyed.

As we discussed in the last Post for Parsha Va'eira, Pharaoh is not just some random king of Egypt, but rather PHARAOH IS THE EMBODIMENT OF THE YETZER HARA - THE "EVIL INCLINATION."

So when Hashem says to Moshe, Come before Pharaoh - now we can have a much deeper understanding that our own Higher Power is telling all of us to Come before our Evil Inclination. For those of us in the 12 Step Program of Recovery, we also have witnessed, like Pharaoh that thru our seemingly "enjoyable" and yet uncontrollable behaviors that we have paid a huge price for our arrogance by having our own family and all that we have built and treasured on the verge of total collapse.

And yet there is hope for those of us in such a Powerless state!

By taking the First Step in the 12 Step Program, we crack open our own slavery by admitting that we are Powerless over our drug of choice - and recognize that the unmanageability of our life is the cause. And thru taking additional Steps, we can learn to "be humbled before Hashem."

In the process of working the 12 Steps - in Step 4 is where WE COME BEFORE OUR INCLINATIONS - where we fearless face the Pharaoh inside of us! The Pharaoh that is inescapably attached to our Selfishness and Self-Seeking, our Need to always be in Control and our Fears of Loss and Rejection. When we COME BEFORE our EGO, we can come out of our own Plague of Darkness - into the Light!

"Once we have taken this step, withholding nothing, we are delighted. We can look the world in the eye. We can be alone at perfect peace and ease. Our fears fall from us. We begin to feel the nearness of our creator. We may have had certain spiritual beliefs, but now we begin to have a spiritual experience. The feeling that the addiction problem has disappeared will often come strongly. We feel we are on the Broad Highway, walking hand in hand with the Spirit of the Universe!" (Big Book, Page 75)