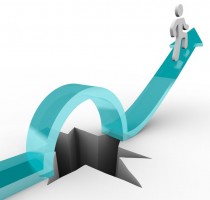 We are unlikely to succeed if we try to fight the Yetzer Hara head on. As the Ohr Hachayim writes (Parshas Acharei Mos), the only way to succeed in this struggle is to diligently guard our eyes and thoughts. Once we are thinking about these things, and especially if we see the temptations before our eyes, it will often be too late and we won't be able to control ourselves.

There are a series of stories recorded in Gemara Kiddushin (80a-81a) where Hashem demonstrated the power of the Yetzer Hara to some of the Tana’im who had belittled it's influence. The Gemara relates that the Satan presented himself to R' Akivah as a seductive woman in a treetop. He became so inflamed that he was unable to resist, and he started to climb the tree to sin. Halfway up the tree, the woman turned back into the Satan and said: "If it wouldn't be that it had been said in the Heavens to respect R' Akivah and his teachings, I'd take your life!". A similar story is recorded with R' Meir swimming across a river to sin with a woman, and upon reaching the halfway point, the woman turned back into the Satan, rebuking him with those same words. We can learn from these stories how it is almost impossible to overcome these tests when a person is faced head-on with powerful lust.

Therefore, to succeed in this struggle, we need to avoid fighting it head on. Just like terrorists are often successful because they don’t try to fight a big army head on, we must also learn to apply guerilla warfare and pre-empt the Yetzer Hara. Fighting him head-on is a sure recipe for failure. Instead, we need to make careful fences to avoid him. To learn what fences we need to make, we have to start asking ourselves how the evil inclination has been so successful until today? How does he get us to fall? How do our minds work in the various situations we find ourselves in? In what habitual ways have we learned to scan our surroundings? How is our mind used to thinking and processing information? Which scenarios most trigger our lust? What moods are we in when it happens, and in what situations do we begin to slip?

When we study ourselves honestly (and sometimes it helps to view our behaviors as if we were a different person watching ourselves from the outside), we can learn how the evil inclination works with us. Then we can pre-empt him and prevent him from fighting us head-on. Ultimately, we must learn to try not to even get into discussions with him at all. Instead of fighting him directly, we must learn to walk around him.