Principle 14: It’s never all or nothing 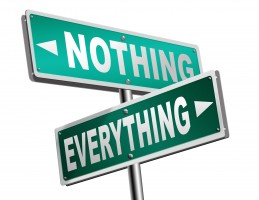 The notion that we must always succeed actually turns us into easy prey for our Yetzer Hara. He uses our good qualities, such as our constant yearning for perfection, and he turns it against us by trying to get us to feel down when we experience a fall! In this struggle, it is never “all or nothing”. When an army goes out to battle, do they always win? Are there never casualties? People injured? The Pasuk says: “There is no Tzadik on earth who does only good and never sins” (Koheles 7:20).

Rav Hutner once wrote a letter to a Bochur who was despondent over his personal spiritual failures. In the letter, Rav Hutner explains that what makes life meaningful is not basking in the exclusive company of one's Yetzer Tov, but rather the dynamic struggle of one's battle with the Yetzer Hara. Shlomo Hamelech's maxim that "Seven times does the righteous one fall and get up" (Mishlei, 24:16), continues Rav Hutner, does not mean that "even after falling seven times, the righteous one manages to gets up again." What it really means, he explains, is that it is only and precisely through repeated falls that a person truly achieves righteousness. The struggles – even the failures – are inherent elements of what can, with determination and perseverance, become an ultimate victory.

If you were watching a fight between a man and a lion, who would you be inclined to reward more, a man with a gun who shoots the lion in one fell blow, or the man who needs to use his bare hands? In the latter case, there is a huge fight and sometimes the man is down and the lion is winning, yet he manages to push off the lion again and again and finally overpowers him and wins the fight! Hashem wants to reward us with infinite Divine delight, and He gave us a beast inside us to slay. He could have made us mighty as the Malachim, but it is only through human beings who fight with their bare hands in the darkness of this world that Hashem’s Divine presence is uplifted and is able to brighten the darkest places.

The Zohar in Parshas Tetzava writes:

For there is no light besides that which comes out of darkness. And when the "other" side is subjugated, the Master of the World is elevated and his honor is increased. And avodas Hashem can only be through darkness, and there can be no good, only though bad. And when a person goes into a bad path and then leaves it, the Master of the World's honor is elevated. And therefore, the "Shleimus" (completion) of everything, is good and bad together - and then to leave to the (side of) good. And there can be no good but that which comes through bad, and from such good, Hashem is elevated. And this is called an "avodah shleimah" (a complete service of Hashem).