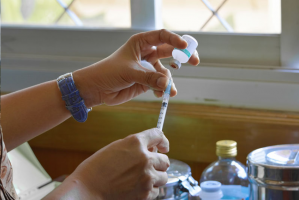 If all else has failed G-d forbid, and especially if the addiction is harming the lives of others or causing us to act in illegal or harmful ways, there are medications or shots that can reduce our sexual drive to the point of chemical castration. If the addiction is harming the lives of others, this should be done as soon as possible - before the next victim is claimed. We will need to be evaluated by experts in this field before these procedures can be carried out. Usually the drive can be brought down to zero over a period of a few months by receiving a special shot once a month.

See contact information below of professionals who deal in this area, in both Israel and the U.S. These shots are often requested by law officials for sex offenders and pedophiles, before the court will agree to release the offender from jail.

Sometimes this method can be helpful for a compulsive addict. By reducing the ability to act on his obsessions, he is given some time to think before acting. Instead of getting a thought and feeling that he must immediately act on it – as he had always done, the shots allow him a moment to try and use the tools (that he learned in the 12-Step groups, such as picking up the phone and calling his sponsor) before acting on his obsession, and hopefully stop himself in time.

However, if the addiction is not harming others, we do not suggest this method unless one has truly tried everything else and can not bear it anymore. As opposed to all the other tools mentioned in this booklet, this tool is not a solution, but rather a cop-out. It is like closing the door on a room full of garbage, but leaving the garbage inside. And as soon as the addict is off the shots, all the garbage returns to destroy their life once again. We were sent down to the world to work on ourselves and grow, and not to just have the Yetzer Hara chemically removed. (Unless of course there is no choice, in which case, this is likely what Hashem expects the person to do).

Note that one can not have children while on this treatment, and it will obviously interfere with marital relations as well. And although there are ways to find a balance where the patient may still be able to be with their wives somewhat, the balance is difficult to ascertain and may take many months to perfect.

To be assessed for this treatment in New York (marketed as Trelstar):

To be assessed for this treatment in Israel (known as Decapeptyl):