Turn our passion to Hashem

by Battleworn (See all authors)

Yesterday we read in the Haftoroh, "Shuva Yisroel ad Hashem Elokecha Ki Chashalta Baovonecha". The Gemarah points out that "avon" refers to sinning intentionally while "chashalta" (you stumbled) implies that it was unintentional. The message is, that once we've sinned, we're bound to keep stumbling. And the solution is, to return all the way till Hashem. Don't try to go half way, because it won't work. We don't need to turn off our passion, rather we need to turn it to Hashem.

The "Reishis Chochma" in shaar haahava tells this story. There was a Jewish man who got this crazy crush on the king's daughter. He managed to tell her that he wants her, so she answered that they'll meet in the cemetery. She meant that only when they're dead will he get anywhere near her, but he understood what he wanted to understand. So he went to the cemetery to wait for her and of course he waited and waited. Eventually he came to his senses, but then something interesting happened. He decided to take all that passion and desire that was welled up in him, and redirect it to Hashem. He became a very great tzadik and all his berochos would be fulfilled.

And then the Reishis Chochma says, that one who has never had desire for a woman, is like a donkey and even less than that. The powerful drive that we have is not a "problem" that needs to be cured. We were given it for a purpose, it just needs to be redirected. If we use it in the right way, the wicked menuval won't even be able to get near us. If we learn to experience spiritual pleasure, the despicable menuval has no chance of enticing us with his garbage. When we have an intimate relationship with Hashem, we don't get depressed, anxious, bored or unfulfilled etc. (Of course the war is never over, and he will do anything he can to get you out of that position of being close to Hashem).

Now is the time, "Dirshu Hashem bihemutzo" is referring to the Aseres Yimei Teshuva, grab the opportunity. Perhaps find a dynamic rebbe or at least a sefer that can change your life (they most definitely exist). You will be shocked when you see what a great person you can become.

This is what Hashem is waiting for, and this is the greatest Nachas Ruach for Him: To go from the lowest of the low to the highest of the high. And I believe we can all do it.

Just an interesting note from something I read in the news:

"Boris Yefimov, a Russian cartoonist despised by Hitler and beloved by Stalin, just passed away now, during Aseres Yimai Teshuvah. He was 109, old enough to have seen the last czar pass in a coach, become friends with Trotsky, have Stalin personally edit his cartoons and vote for Vladimir Putin. When Yefimov was just 107, several Israeli newspapers reported that he was very likely the oldest living Jew, though he began to practice his religion only when he was 100".

Did you hear that Chevreh? He started keeping Mitzvos at 100 years old! It occured to me, that perhaps Hashem took him back davka during the Aseres Yimai Teshuvah to teach us all that it is never too late to do Teshuvah! 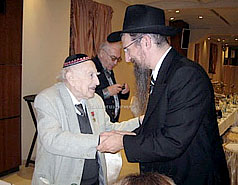