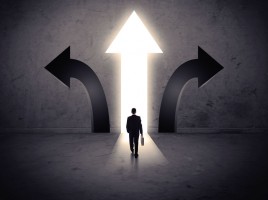 On the day that Rabbi Shimon Bar Yochai passed away, he revealed many great secrets of the Torah which had been hidden in his heart until this day. The secrets he revealed can be found in the "Idra Zuta" in Parshas Ha'azinu. The Idra Zuta discusses the parallels between the human body and the corresponding spiritual worlds. It starts out with the head and moves downwards, discussing the many different limbs of the body - and how they parallel the upper worlds.

In the final moments of Rabbi Shimon's life, he talks about the Yesod - the highest of the high, and how the connection between the male and female body is parallel to the Kohen Gadol going into the Kodesh Hakadoshim once a year.

Here is a rough translation of Rabbi Shimon's final words on this world:

"And all the desire of the male towards the female is here (in the Yesod), and it is called "blessing", because from there goes out blessing to all the worlds, and they are all blessed. This place is called "Kodesh", and all the holiness of the male goes into there, into that level called "Tzion", which is then called "Kodesh Hakodashim".

And all the 'chasadim' (kindnesses) are drawn down from the upper head of the male, from the side of the upper wisdom, and all that blessing travels through all the limbs of the body until the place called "Tziva'os" (parallel to the eggs of the male), and all the 'chasadim' gather there, and therefore they are called "Tziva'os", for all the Neshamos above and below come from there. And those 'chasadim', after they gather there, empty out into the Yesod, all white - therefore it is called chesed, and this chesed (the semen) goes into the Kodesh Hakadoshim, as it says "for there Hashem commanded the blessing and life forever"...

Says Rebbe Abba: The holy flame (Rabbi Shimon) did not finish to say the word "life" and his words became silent. And I wrote, thinking to write more, and I did not hear. And I didn't pick up my head, for the light was very great and we could not gaze. And we shook as we heard a Bas-Kol say "Orech Yomim U'shnos Chaim etc..."

After the fire had left, we saw that the holy flame, the Kodesh Hakadoshim (Rabbi Shimon) had passed from this world. He was wrapped in a Tallis, lying on his right side, and his face was smiling...

How does this relate to our struggle?

Rabbi Shimon reserved the deepest and holiest of all secrets for the very end... And what were those secrets? The parallel between the intercourse of man and woman to the highest of the high, to the Kohen Gadol going into the Kodesh Hakadoshim on Yom Kippur!

There is nothing in the world that can bring us higher than the Yesod. What we experience on this world is but a shadow of a reflection of the holy parallels in the upper worlds.

By being Mekadesh our Yesod, we can reach the highest levels of Kedusha - like the Kohen Gadol on Yom Kippur entering the Kodesh Hakodoshim!

May the zechus of the holy flame, Rabbi Shimon, be a Meilitz Yosher for all of us, to help us be Mekadesh ourselves above and below, particularly on this day of Lag Ba'Omer where the Idra Zuta says: "Many Prosecuting (Angels) are silenced on this day in your (Rabbi Shimon's) merit".

The real meaning of Yesod is "connection". As we prepare to enter the week of Yesod (beginning Tuesday night), may we all be zoche to achieve true kedusha and "connection" with Hashem.