The suffering of the family 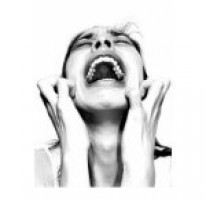 My husband was so bold and so over-confident that he behaved as if he ruled the world and thought he was infalable. He even performed his addiction in front of my eyes without shame. For many years of our marriage he would turn on the computer after the kids had gone to bed and effectively ran raw sewage through our home with no shame whatsoever, even the religious books in our cupboards didn't make him flinch or stop for second.

If I would come down and tell him to turn off the computer and come upstairs, he would talk to me as if I was his child and say "go to bed - I'm coming later." He wouldn't turn up of course, he would stay up all night - night after night after night - until Shabbos came and he went to shul. Often he would be chazan and everyone would compliment him and smile at me and the kids and say how lucky we were. It made me suspicious of all mankind.

At home he would show his true self. On Friday night he slept by the table and never had any time for the kids whatsoever, often he was so finished from the week he would end up on the sofa all night get up early for shul and after lunch he would sleep for ages to re-charge his batteries for the porn-filled week ahead.

I screamed, shouted, behaved like a mad desparate woman and carried around so much pain I cannot begin to express its depth - and all the while he carried on. He found me unbelievably boring while I found him selfish, self gratifying, perverted and abusive.

I then decided to refuse anything I felt was not kosher and not right - I explained to him my soul was suffering - I then became extremely boring - overnight I became a granny in his eyes, but I stuck to it. One day when I was due to go to mikvah - I looked at him in the kitchen and smiling I told him the news (he never counted - after all he didn't really care enough), he laughed and asked "you care that much?" I said "don't you?" I then went away very miserable and he said he hadn't really meant it. He tried to persuade me to go but I refused and he then got angry and verbalised the awful truth - which I knew already but it sounded so awful when it was actually said. He said "he didn't actually need me anymore anyway and I meant nothing to him and with that, he switched on the computer.

I stopped going to the mikvah altogether and that year I enrolled on a university degree. It demanded so much of my attention it literally saved me - if I hadn't shifted my attention I would be divorced by now for sure - my intention was to get more qualified so I could get a good job and find a way of getting out of this marriage and the constant pain.

By the end of a whole year of separate lives we somehow got back to together with lots of promises that things would be different.... but gradually they got worse, he started using the internet all day as well as all night. Time lost all meaning - he could be there for hours on end.

One day my daughter complained that when she got home from school "Daddy had opened the door in his underpants." Apparently he had forgotten the time she was due home from school. Thank goodness he was not a child molester of any type - and was actually very regretful that this had happened, it was clearly a direct (though unnaceptable) result of his addiction. On another occassion my son walked into the living room and just as he was about to pass the computer my husband's hand gave him a firm push backwards to stop him in his tracks and stop our little tzadik from seeing harmful material. I had just been serving supper (which he never had time to join us all for, as usual) and he thought we were all in the kitchen and amazingly he took the risk of contaminating his own children - his addiction was so strong it was just unbelievable. I tried explaining to him that he had a serious problem but it was to no avail, as he believed he didn't and he could handle it.

Last year I fell pregnant by accident and I immediately ran to have an abortion - I just couldn't face the idea of prolonging the torture of living with him. I told him, but although he said he would prefer me not to - he was staring at the computer whilst he said it. I saw my whole future ahead of me at that moment and quickly went on my way to the Mary Stopes Building. I comforted myself with the knowledge that I was only six weeks gone and Hashem knew how much I had suffered.

This year my husband fell ill with deep depression and has been on various SSRI's, all of which haven't worked at all - I have just finished my degree and I've had to find the resources within me to take care of him. If love were a bank account - well, he was already well overdrawn!! At times I've not been able to manage him at all. He now shuns the computer and can't bear to look at it. This was not a result of sudden strength of character, but due to being too ill, suffering too much and being full of shame, remorse, regret and pain.

I hope this story helps others - so please feel free to pass it around - it might make another man who is addicted understand the terrible pain he brings to his own family and the terrible price of his addiction.