One of our goals at GuardUrEyes, is to help people "Hit Bottom while still On Top". Dov's story can help us all understand the "nature" of this addiction, and where it ultimately leads to, if not dealt with properly in the earlier stages. 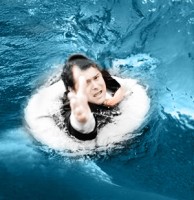 Someone emailed me about your website a few days ago and I enjoyed reading a lot here, thanks. It is always nice to "meet" other people that I can relate with, and commiserate with what other people are going through.

After doing the first of the 12-Steps (admitting powerlessness) and sharing my story with others, it became clear to me that I was actually very ill. For years and years, I had thought I was just plain "bad", at best pitied by, at worst despised by, Hashem. I was, in fact, doing severe aveiros (sins) and failing miserably at being an eved Hashem (servant of G-d). I knew that life was not supposed to be this way, but I always seemed to fall into trouble and act on my compulsions. As a result, my emunah (faith) that avodas Hashem (divine service) was really possible for me, was very low. That continued for over ten years.

Then I got married and it got much, much worse for yet another ten years. I went to a few different therapists and spoke with a few Rabbonim, usually under the pretense of "having marriage problems". The real problem was, of course, that I had a double life and it was driving me crazy. Some of those people were a little helpful to me, some quite the opposite. I even called Rabbi Twerski (in 1991 or '92) who told me exactly what you report here on your website: that I probably need a 12-step group. I couldn't do that though – I thought, because my wife would find out (I couldn't hide going to weekly meetings!!). Also, I felt that the whole complicated recovery thing would "cramp my style". I resigned myself to thinking that the best I could hope for, would be to die at a ripe old age with a big, giant, ugly secret in my safekeeping.

About six years later, I finally hit bottom. It became clear to me that I was getting only worse, never better, and that if I would take even one step further down – which I felt I HAD to do – I'd have to leave everything behind; my family, my self-respect, my community, the Torah and mitzvos, and even give up on any struggle for a connection with Hashem… In short, everything I defined myself and life by, was "up for grabs". I saw no way out and was terrified. I had been terrified many times before (usually by getting caught or fearing getting caught), but this was different. I knew it had nothing to do with getting "caught" by anyone. Even alone with myself "uncaught", this life became unbearable. I went to a therapist the next week and told her my story, and she suggested I go to SA meetings.

I have been going ever since and have been helped directly and indirectly by Hashem – Who I now know as my Best Friend – to stay sober so far. My davening (prayer) and learning went through a long cold period (for about 3 years) soon after getting sober, but with lots of help and a few years of patience, it finally turned a corner, and now, like my marriage and my life in general, the davening and learning are better than I had ever dreamed they'd be. I often have some awareness that I am really, comfortably, living with Hashem. Of course, I still have plenty of problems and have ups and downs, but they aren't as big a deal as they used to be, and there is always this "background music" of hope, telling me it's going to be alright.

Here is my point: The traditional AA approach saved my life. By this I mean, the AA message that I have a mental illness of addiction (to lust), a spiritual disconnect from Hashem and from people, and a physical allergy (to lust) that will eventually kill me. Immoral lusting in any way, makes my life completely unmanageable and makes me useless to others. Many other people appear to be able to use it a little without suffering as I do. For them it is just a "moral failing", while for me it leads to a downward spiral of insanity and failure, just like alcohol for an alcoholic. In my case, focusing on my struggle as having to do with my normal "Yetzer Hara" (evil inclination) was a sure recipe for failure. It made me simply try harder, use new tricks, and get yet more support. The message of AA to me (through SA) was not about any of those. It was about accepting the fact that I am fundamentally different from non-addicts, and accepting that I am not a BAD person getting GOOD, but rather a SICK person getting WELL – with help from Hashem. I had to accept that this disease had me completely beaten, just like cancer or diabetes. You don't struggle against a disease, you get the treatment. Plenty of people don't, and they die as a result. The standard "Teshuva" (repentance)thing did me no good at all, simply because it is not structured for crazy people. This was not just a "Ruach Shtus" (spirit of folly), it had become my standard of living. I needed to first learn to get honest with myself and others. That took me about a year and a half of frequent program calls, regular meetings, work with my sponsor, and the 12-steps.

And my recovery was still clearly a neiss (miracle). Just like Hashem cures people from cancer and other illnesses when the patient takes his or her medicine/treatments, I had to do the same, and He did the same for me. And Hashem continues to do it each day, because I believe that I would still use my addiction and continue to ruin my life, should I just get uncomfortable enough with living. Putting the steps into action every day, keeps me comfortable and sane (at least it has so far!).

I think that some frum (religious) people, especially those who feel strongly about either beating the Yetzer Hara (evil inclination) themselves as a supreme kiddush Hashem (divine sanctification), or who feel that the answer must be in the Torah if they only look hard enough, may have a hard time with this approach. But I doubt they would use that approach with any other disease. For me, it was too confusing to mix mussar concepts with the 12 steps, particularly early on. It was toxic, actually. Yes I know that lust – i.e. using and acting on lust, is not exactly like alcohol, as it involves aveiros chamuros (serious sins), while drinking alcohol is not an aveira per se. Nevertheless, hanging onto the purely religious approach would have left me as I was for twenty years: looking for the answers with broken eyeglasses. The way I read them, the 12 steps are about getting my eyes (mind and body) fixed and THEN getting frumer (more religious), not about getting frumer in order to stop. In fact, I got very frum, but the frumer I got, the sicker turns my addiction took! I grew quite disgusted with myself along the way, to put it mildly. Please don't get me wrong. I am not saying that any other approaches are wrong, I'm just sharing what worked for me.

Even though the principles of the 12-Steps are Torah-based, AA, in my experience is a sanity-building tool, not a religious one. Because I am a Jew though, after I started to gain sanity and some freedom from the compulsive acting out and lust-thinking, I was able to start growing, thank G-d, into the Jewish man that Hashem wants me to be. And the steps are a tool that I use to stay on that path now as well, one day at a time. I wish all the people using this website Hatzlacha and I send my love to all of you, my brothers!