The Forward talks about GYE 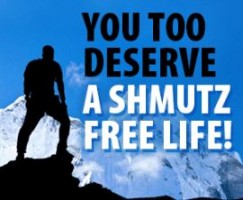 Alongside the cheery faces of smiling boys and men, there is often a nondescript blue advertisement depicting two silhouettes: one man in front of a computer, head in hands, and another posing triumphantly in front of a mountain.

The tagline reads, “Struggling with a Shmutz problem? You too deserve a Shmutz-free life.”

While a 2018 Gallup poll found that only a slim majority of Americans believe that pornography is “morally wrong,” for observant Jews, pornography is forbidden. The Talmud, as well as other halachic works, strictly forbid spilling sperm in vain as well as having impure thoughts of women.

But due to the ease of access the internet provides, thousands of Orthodox Jews have struggled to avoid it.

As Guard Your Eyes founder Yaakov Nadel notes, the privacy and ease of viewing pornography online make upholding such a standard more challenging. “With the internet being so accessible and so anonymous, and a person is alone in his office, I don’t care how religious and how spiritual he is. It just takes one little pop-up to pull a person in,” said Nadel.

Nadel, an Orthodox programmer, started Guard Your Eyes in 2007 as a side project. Nadel himself was struggling to avoid online pornography and decided to do something about it. He bought a domain, guardyoureyes.com, and created a forum for observant Jews just like him.

Of course, not everyone in the Orthodox world takes a gentle approach to this communal challenge. “A lot of the standard religious approach to this is a lot of fire and brimstone. That it’s a terrible sin. You’re going to go to hell and you create thousands of damaging angels when you do it and all types of scary things, but that’s not our approach,” said Nadel. “We use a much more positive approach.”

When one goes to the GuardYourEyes website, an animated video of a successful “recovery” immediately pops up. Many of the people who work at GuardYourEyes are individuals who had struggled with pornography addiction themselves.

“By nature we know we’re created with a very powerful desire for these things,” said Nadel. “No one is immune to the pull of these things. It makes no difference if you’re religious or not religious.”

“There are so, so many reasons that I would tell a person to avoid pornography that have nothing to do with religion,” said Nadel. “It destroys marriages. It warps our expectations. It turns women into objects and the worst part of it is that it can become an addiction.”

“We’re not allied with any denomination, sect or religious group. It’s open to anyone who’s looking to recover,” said Michael, a volunteer at PA. “Most people that come into PA, including Jews, don’t come for Jewish reasons. They’re not coming because the Torah told them it’s not a good idea to do this or their Rabbi said you really got to work on this. They’re coming because their life became unmanageable. They got addicted.”

While Guard Your Eyes functions like an organization, PA functions more like a regular “12 step” recovery fellowship for addicts, similar to Alcoholics Anonymous. Members follow the “12 step program” and attend regular group meetings, either face-to-face or over the phone and internet. Although PA was only founded a few months ago (in Israel) and hasn’t had much advertisement, it already gathered hundreds of members around the world — both Jewish and non-Jewish.

“It’s like any bad compulsive behavior and they just can’t stop,” said Michael. “This is a strong addiction and people that have fallen in it feel like they just can’t crawl out. They come to a 12-step group as their last hope, hoping that there is a solution and there is.”