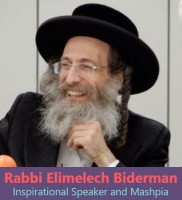 I heard today from a Choshuve Yid, R' Yehoshua Kleiner. He was very close to the Beis Yisroel (of Gur). Years ago, as a bochur, he spent a lot of time with the Beis Yisroel. He's an old man today. May he live to greet Mashiach. He once asked the Beis Yisroel, in previous times, there were tremendous ba'al madreigos, lofty yidden... we don't see that today?

Shia'le! The Beis Yisroel exclaimed! Look out the window! If someone walks on the street nowadays, and he guards his eyes, then he is the greatest ba'al madreigah. You're saying there are no lofty Yidden? Today, if you manage to guard your eyes when your outside, then you are very, very great! It's a tremendous thing we if we can guard ourselves. This is the purpose of the days of Sefirah now, days of purity, this should be a focus in our lives as yidden.

The Aruch HaShulchan says in Siman 489, that the Korban Omer brought on Pesach, consisted of barley (which animals eat) and the Shtei HaLechem on Shavuos (consists of wheat (which humans eat). The Aruch HaShulchan asks, why is this? Because these are the days in which we try to rise above the animalistic aspects of ourselves. Whats the difference between an animal and a human being? A human being has some control over himself. Control! Someone asked his Rebbe, when we say the morning brachos, why don't we say 'shelo asani beheimah'. The rabbi answered in jest, because it may be a bracha l'vatalah - A bracha said in vain. Because what if a person doesn't control himself then what are you doing here? This is the purpose of the sefirah today, we should uplift ourselves.