What a Fool I Was!

“A person does not commit a transgression unless a spirit of FOOLISHNESS enters him!” 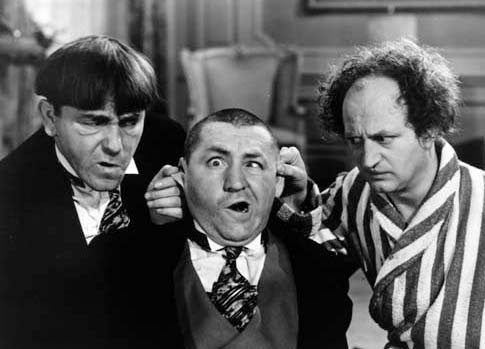 “And the people began to commit harlotry with the daughters of Moab..”

How did we FALL? We were so HOLY!

Parashas Balak tells the story of Balaam, the Greatest Prophet of the Gentile Nations who was hired by King Balak of Moab. Balak was freaking out because of the advancing nation of Israel. So he commissioned Balaam to curse Israel.

After failing three times to curse Israel – in fact, Balaam only saw the Holiness of the Nation and ultimately he could only bless them.

Balak was furious! And Balaam left humiliated. But he had one last plan. What better way to destroy the foundation of the Jewish Nation than to tempt them into sexual immorality. He knew that G-d does not tolerate promiscuity – the only times the Torah speaks of G-d’s anger as אף, “wrath” is when it is provoked by immorality! (More Nevuchim 1:36)

Balak was thrilled with Balaam’s Plan and even sent his own daughters to entice the Jews.

Let’s follow this incredible story of how quickly LUST brought us down from the loftiest heights we had built during our 40 years in the desert!

We learn in Sanhedrin 106a that Bilaam knew that not only did our men lust after the Moabite women, he also knew that we lusted after Georgia Armani fine linen Egyptian flax suits –

That’s right, after spending 40 years in the same old clothing, who wouldn’t want some more threads from luxurious Egypt?!

And here’s where the story gets obscene! The Moabite women set up their tents to sell their fine linens to the men. But they cleverly put an “old harlot” on the outside who only offered their linen garments - at full price.

But on the inside of the tent were the “young, beautiful” harlots who would call out to the Jewish men and offered the linen garments at half price!! If you’re like me, you know how much we Jews love to get a bargain!

But wait, there’s more to the Story! The men had to go thru this episode three times before the young harlot would say to the Jew, “Behold, you are like a preferred customer” and invited them inside their tent and offered them “pitchers of Ammonite wine” (forget Mogan David wine!) Now you can use your imagination to figure out what happened next…

Now go back to the Parashas (chapter 25, verse 1) which says,

“And Israel settled in Shittim…”

R’ Yehoshua in Sanhedrin 106a says that Shittim means that they engaged in SHTUS, matters of FOOLISHNESS!

How many times do we find ourselves, very pleased with how we got to Shul on time and davened Shachris with such Kavanah. We learned the Daf Yomi (our third time thru Shas) and conducted honest business dealings. We ate a kosher lunch and we benched slowly. We went home (after Mincha/Maariv) we honored our wives and said Shema with the kids.

Everything was great, our wife was tired and went to sleep. All of a sudden, the thought crossed my mind…that if I spent a little time on the computer, I could catch up with the news and sports stories. Then I thought, what harm could there be by watching the movie trailer for the latest hit – Wonder Woman (a nice Jewish girl, too)! It wasn’t very long before we found ourselves searching for more than just wonder women! And before we knew it, it was past 3 am that we went to sleep. Fortunately, our wives didn’t wake up to catch us in the throes of our SHTUS, our FOOLISHNESS, but we paid a heavy price the next day – no Shachris or Daf Yomi – my irritability wrecked my day at the office and when I finally got home (forget Mincha/Maariv), I snapped at my wife and kids.

“It is easy to let up on the spiritual program of action and rest on our laurels. We are headed for trouble if we do, for lust is a subtle foe. We are not cured of sexaholism. What we really have is a daily reprieve contingent on the maintenance of our spiritual condition.”

If you’re like most of us, and having some difficulty maintaining your sobriety and recovery – let me share a little gift with you, (BB pg 84). It is called the “The Plan of Action for the Man in Recovery” and I promise it will bring you sobriety, serenity and forever change your life: 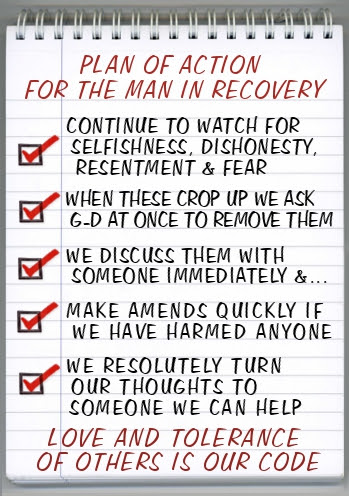 I suggest you print and cut out this Plan of Action card and keep it in your wallet or at your desk as a frequent reminder how to STAY OUT OF SHTUS!