Cotton Candy and the Art of Surrender 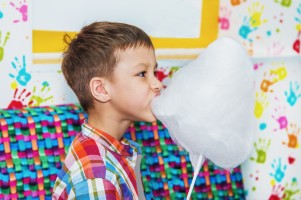 One of the greatest successes of the 12-Step program is in teaching addicts how to surrender instead of fighting against desires that they feel ‘powerless’ over. But the question often comes up, what does surrender really mean and how is it really different than ‘fighting’?

I thought of an analogy that might help us understand better how this works. Let’s imagine a 6-year-old child who is crazy about cotton candy, he simply can’t resist it. He passes by the cotton-candy man each day and uses his pocket money to buy himself the delicious treat. But his Dad keeps telling him that it is bad for him, it is just plain sugar and will make him fat and give him cavities and make him sick. But he just can’t say no. Each day, as he gets closer to the cotton candy man, his mind begins fighting back and forth, he knows it’s bad for him and that Dad doesn’t approve, but he just can’t resist the temptation and keeps falling for it. The fight is basically a foregone conclusion for this 6-year-old. He simply doesn’t have the maturity of thought, nor the self-discipline or the ability to visualize the future damage that he may be causing to himself. Could we expect more from a 6-year-old?

But now, let’s imagine that his father is taking him for a walk. Soon they are about to pass by the cotton-candy man and the young boy begins to imagine the sweet taste of the candy and wishes he could run and buy the treat. But he is holding his father’s hands and feeling his father's love. He knows that his father only has his best interest in mind always, and even though he is perhaps too young still to fully appreciate it, he is so grateful for his father’s presence in his life. As they get closer, he remembers how his father always chides him about buying the treat, and he knows deep down that his father is right. After all, he is just a little boy and his father is so much older and wiser.

Does the boy have to struggle not to break away and go buy himself the treat? His father’s will for him is so much stronger than his own, and he knows that it’s for his own good. The boy doesn’t have to fight anyone, neither himself nor his father. He will just naturally ‘let go’ of the notion as they pass by the cotton candy machine and continue walking down the street. And he notices how his father gives him a big smile as they pass by, and he feels his love more than ever.

Perhaps this is how surrender is supposed to work. Addicts are like 6-year-olds facing the irresistible cotton candy. We’ve lost the ability to think rationally or visualize the future damage that we are causing ourselves when we act out, and our own strengths can’t win this fight. But the 12-Step program teaches us how to bring G-d, our Father, more into our lives. We learn to rely on Him more, and we trust fully that He truly has our very best interest in mind at all times. We begin to feel that He is holding our hand, even when we feel down. Then, when we pass the temptation, we no longer need to fight with ourselves to give it up. We simply surrender to a Will that is so much larger than our own, in the knowledge that we are being cared for by Someone so much greater and wiser than ourselves.

So the next time the temptation strikes, let’s try to imagine we are walking hand-in-hand with G-d, feeling His love, and trusting that He only wants the best for us… And hopefully, we will see that instead of fighting, we can simply surrender our will to our Higher-power and move on with a smile :-)

When I asked Rabbi Twerski if I had expressed the idea of “Surrender” correctly, he responded (by phone) as follows:

"The moshol is very good, the only problem is that you need a lot of Emunah. Because the child knows he is holding on to the father's hand. The “shvisi Hashem linegdi tamid” is where it breaks down... The addiction is a massive attack against Emunah. And as Chavakuk said, all 613 mitzvos can be summed up as Emunah. The addiction attacks all 613 mitzvos by attacking Emunah. But I agree with the Moshol (because that's what the 3rd step is all about -"turning our will and our lives over to the care of God", and Steps 4-12 are all teach us how to do Step 3 the best we can). I think you expressed it well, it's very good. Although there are probably different aspects of surrender, this one is certainly very good."