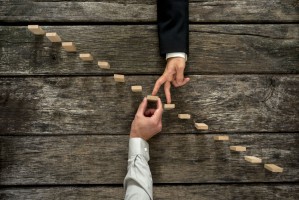 A GYE member (likely not a real addict), used the GYE partner program to get together with another GYE partner and has been getting closer and closer with him and finding more honesty and success in staying out of trouble, and so has his friend. It's only been a month or so but still, that's really something!

This member asked Dov for advice on what they should talk about when they get together, which is at least a couple times a week. His question was: "Should he and I be getting together to talk about the 12 steps and work through them? Or should we be talking about something else?"

Dov's response to him (below) could be helpful for a lot of people who are not addicts but just sincere yidden who are trying to be clean and who are using the partner program of GYE. Dov also distilled some of the elements of the 12 Step program in his response below, and I believe that can be helpful even for normal people struggling with normal problems.

I'm unsure that the 12 steps should be a central topic in your discussions. I can see many more worthy topics for two friends to be discussing, like: what ways to increase honesty in your relationships with everybody around you. There are many aspects of this that slip by unnoticed and, strangely, they are a central topic in these problems and actually the secret to success.

Another topic might be what things are going on in your life and how many of them deserve your attention that you're really not paying attention to. Another might be the quality of your marriages and working on them more actively because they are the central theme in your entire life, no matter what people say about learning Torah and about child raising and about everything else. Your marriage is the central theme of your success and obligation in this lifetime. No question about that, and there are many places that indicate this very clearly in s'forim.

But I would avoid discussion about shmiras einayim, kedusha habris, kedusha in general, etc. An important idea needs to be understood here: the way you got here is what's keeping you in the same mess. This means that if you have been fighting it and ended up here, that's probably how you got in this mess in the first place. Whether you've been succeeding a little bit or partially in some respects, is just a trick. The solution will not be down the road of putting more attention to this problem, but on admitting the whole truth about why you're unsatisfied with life as it is. When a person feels deep down inside that 'G-d is really unfair by putting so much responsibility on us and then we get judged for it', or secretly feels 'life is supposed to be so much better than this, I can't wait until it is', they will always resort to desperate measures. Many people who are in codependent relationships, workaholics (or learnaholics), or otherwise imbalanced in life and difficult to live with, actually have this problem: they just can't make peace with reality and life as it really is. If we don't come to terms with reality and get true wisdom (as Ramb"m states clearly), we will manufacture promiscuity and other distractions for ourselves from our unfortunate and peace-less lives.

True inner peace and acceptance of reality is not something that we typically speak about. The closest we typically get to it is in repeating true but pithy sayings like gam zu letova. We have few tools for bringing it into our hearts, and when it comes to actually doing so practically, few do. Who looks at their children and surrenders them to Hashem? Who looks at his work and puts it truly in Hashem's hands? Yes we say all kinds of bitachon-related things. But saying that we put it in Hashem's hand means nothing unless we have first taken it out of our own. Surrender, is a thing we rarely hear about except from people who have undergone horrifying tragedies like that man who lost seven children in the fire in his house on chanukah a few years back, R"l. He spoke about surrender explicitly, even using that word, because there was obviously nothing for him to hold on to anymore. A person in his position just looks like a fool when he emotionally holds on to his dead family, R"l. Often, younger people and adolescents can read this and think they understand it very, very well, but it's actually quite rare. It's very easy to understand an idea like this intellectually, but another matter entirely to truly live by it. A person who's living by these ideas actually feels differently about things first and as a result of viewing them differently and feeling differently about them, he or she actually responds differently to them. And that's typical in recovery of all kinds whether it's 12 steps or not. Studying something mentally isn't going to bring it into the heart. It's not going to make it real, until somehow it becomes real.

That's why I'm suggesting talking about these things with your friend and looking at ways to apply them in your real life. The way your wife or children treat you. The way that your co-workers or friends in yeshiva treat you, the way that people on the street interact with you and how you interact with all of these folks actually is where this stuff happens. The stuff that you think about when nothing else is happening and no one is around - when you're alone. These things are important and they reflect what is deep inside us. That's the kind of stuff I would focus on, if I had a friend like you do to talk about things with.

Now, I'm by no means suggesting running away from admitting the truth about your desires and sexual mistakes you may make. I'm also not suggesting running away from admitting the truth about everything you have done in the past. As the Rebbe R' Meilech describes clearly in #13 of his Tzet'l Kotton, opening up "on a repeated and regular basis to a mentor or friend explicitly and without any shame, breaks the power of it." So even if I would not be a sober addict in 12 steps, I would still strongly espouse honesty and openness about all the details of our behavior to other safe people. But my point is not to dwell on it after admitting it explicitly and clearly but instead to go on from those admissions and into 'the main course' of honesty in life and facing the real issues we have, openly, by accepting life on life's terms and surrendering our will to Hashem.